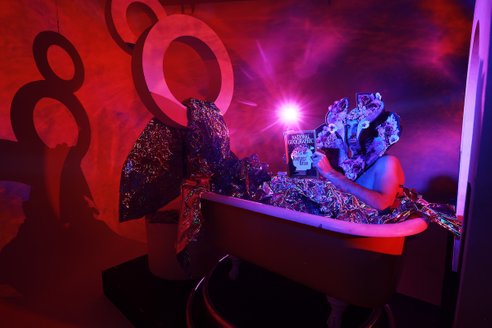 Welcome to the world of Europe's best kept DJ secret.

Looking back at more then two decades of Djing, Noema is a true master at the decks.
Through his profound selection, mesmerizing dramaturgy and exceptional mixing skills, his sets take the audience to dionysian highs and places beyond the listeners imagination.

You’ve probably moved your feet to his edit of Ata Kak ‘Daa Nyinaa’, a stone-cold fox of an anthem that appeared on massive hit African Shakedown #1. The record is considered one of the hottest records of 2013 by FACT mag and was on heavy rotation with Soul Clap, Wolf+Lamb, Axel Boman, Totally Enormous Extinct Dinosaurs, Motor City Drum Ensemble, Pillow Talk, Erol Alkan, Psychemagik... just to name a few.

In 2022 he started his MAGIC JAMS moniker, which is focused on Cosmic Disco, Balearic Beat and eclectic music in general.

As head of The Magic Movement label, Noema is responsible for iconic releases, such as 1542 by Xique-Xique, Folha du Jurema by Nicola Cruz, and Ponto Gira by Carrot Green. He also discovered Oceanvs Orientalis and released his debut EP Khronos .

It is impossible to categorize Noema's sound in common genre terms. Without borders, he creates his very own and truly unique blueprint of contemporary clubmusic. His eclectic music selection flows freely between all kinds of electronic music. Between Downtempo and House Music he adds Brazilian tunes, Turkish edits, Disco jams, Balearic rides, Folk-Rock, Pop, Jazz and everything he finds worth sharing. Noema's aim as a DJ is to find the perfect soundtrack for the moment, may it be a dark Berlin basement in winter or a day party at the beach in Mexico. Mostly psychedelic and always soulful, sensual, suprising, rich in percussion and ranging from a good old rave to groovy beach vibes, his sets are always unique and taylor-made for the occasion.

If you never experienced one of his sets, be ready for a symbioses of time, space and music. Dancers repeatedly report about blissfull and trancendential moments on the dancefloor. Nevertheless, new-age fake spirituality is not Noema's thing. He prefers to keep these moments mystic and as pure experiences that have no need to be talked about.

Infamous for his all night long and „infinity dance“ sets, Noema regularly plays up to ten hours and more. The dramaturgy of these sets are legendary. As beeing a truly passionate DJ, once you put him at the decks, he never stops.

On his regular tours, he plays shows in London, Amsterdam, New York, Los Angeles, Tulum, Sao Paulo, Paris, Istanbul, Moscow, Ibiza, Mykonos and many more places all around the world.

While playing guitar since he's six years old, Noema performs since early childhhood and won a grant and several awards in the process. Later on, he acquired a master in classical guitar and music theory and was teaching both subjects in a music school for ten years. His backround in

Theatre and contemporary Dance, the attitude of a classically trained performer, his vast knowledge of music through his profound education in classical music and Jazz aswell as twenty years of intense music digging add up to an artistic integrity that is hard to find these days.

Through his strong affinity to slow grooves and contemporary electronic music from South America he developed the „Cozmico“ concept, which connects the „new“ downbeat scene around artists like Voodoohop, Nicola Cruz and himself to Cosmic and Afro Style of Djs like Daniele Baldelli and Beppe Loda. You find the whole article here.

Furthermore, Noema is the co-founder, artistic director and A&R of The Magic Movement label, home of artists like Oceanvs Orientalis, Nicola Cruz, Xique-Xique, Crussen, Dreems, Luca Musto, Yor Kultura etc. Founded in 2013, it was one of the first labels that supported the new downbeat scene. The focus of the label lays on all kinds of percussive and psychedelic dancemusic. Since the beginning, the label gained great respect in the scene, by paying close attention to every aspect of their releases and delivering the highest quality of music, sound and artworks.

Since 2003 Noema held DJ residencies at several German clubs,
including the infamous Soju Bar (alongside Hunee) from 2012/2013
and Wilde Renate from 2008-2018, according to RA one of the Top-10-Clubs in Berlin.